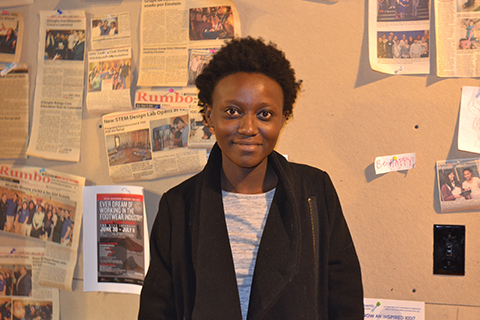 My YDO Story | Making the most of opportunities

Through YDO I have established a group of similarly minded Lawrence kids who are not only friends but also teammates who have worked on projects with me and promise to be a source of collaboration for the future. I also gained exposure to other resources outside the city, namely Youth CITIES. I joined Youth CITIES as a naive sophomore knowing nothing of entrepreneurship, but I left with What’s Good in the Hood, a body of work I was extremely proud to be a part of. YDO provided a space for us to work and a form of transportation for events. Without YDO, What’s Good in the Hood would not have thrived the way it did.

My fondest YDO memory is of the time we won a documentary contest for What’s Good in the Hood. An Emmy-Award winning producer came to Lawrence and recorded us working in the YDO/WGITH office on an issue of the newsletter. I was so proud of my team. I felt so professional, and I felt like the platform we had been fighting for, the one that would showcase Lawrence in a positive light, was finally within reach.

I knew of YDO because as a 7th grader all of my friends at the South Lawrence East spoke of a mysterious man named Howard who fed them snacks and drove them to afterschool programming. For a while, Howard tried to contact me, but I did not officially meet him until 8th grade when I started Math Games, which was held at Cambridge College and taught by Jon Schwartz.

From that very first day at YDO, I met a group of friends that I am still close with today. YDO opened that door for me to participate in programs I otherwise would not have known about and, perhaps more importantly, introduced me to kids who were ambitious like I was.